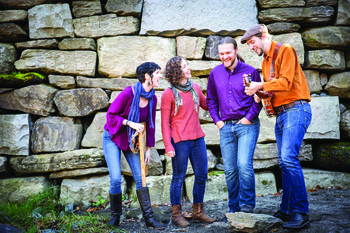 “The most exciting vocal group in a generation,” Windborne’s captivating show draws on the singers’ deep roots in traditions of vocal harmony, while the absolute uniqueness of their artistic approach brings old songs into the present. Known for the innovation of their arrangements, their harmonies are bold and anything but predictable.

With a 20-year background studying polyphonic music around the world, Lauren Breunig, Jeremy Carter-Gordon, Lynn Rowan, and Will Rowan share a vibrant energy onstage with a blending of voices that can only come from decades of friendship alongside dedicated practice. The ensemble shifts effortlessly between drastically different styles of music, drawing their audience along on a journey that spans continents and centuries, illuminating and expanding on the profound power and variation of the human voice. The singers educate as they entertain, sharing stories about their songs and explaining the context and characteristics of the styles in which they sing.

BBC Traveling Folk describes Windborne as “subverting expectations and redefining the genre [of vocal music] ... just absolutely phenomenal!” Audiences and critics lavish praise upon the singers not only for their technical mastery, but for the passion, engagement, and connection with each other and the audience that imbues each performance with a rare power.

But there’s another, crucial dimension to Windborne that guides and roots their artistry. They are adherents to folk music’s longtime alliance with social activism, labor and civil rights, and other movements that champion the oppressed, the poor, and the disenfranchised. Their 2017 project, Song on the Times, is a collection of songs of social struggle from the past 400 years, sung for the struggles of today. Bursting with lyrics that, while penned decades or centuries ago, still ring true in modern times, Windborne’s dynamic harmonies breathe new life into these songs. The group was unexpectedly propelled into the limelight when a video of them singing Song of the Lower Classes, (originally from the 1840s in England) outside Trump Tower went viral in 2017, prompting their shift into touring full time. (tinyurl.com/SOTLC)

Windborne has spent the pandemic developing and recording their 4th album, Of Hard Times & Harmony. This upcoming project continues to explore themes of social consciousness, singing in four languages and showcasing the depth of emotion their voices can evoke, as well as the moments of hilarity and wit that audiences will recognize from live performances. The group is committed to bringing vocal traditions to a younger audience and over the past year has found surprisingly viral success on TikTok for such unlikely genres as Corsican polyphony or early 20th century labor anthems.

Having performed around the world as Cultural Ambassadors with the US Department of State, and in 2,000 seat theaters with productions like A Christmas Celtic Sojourn, the singers of Windborne remain grounded in their music and passionate about their message and comfortable in venues of any size. Their vast repertoire enables the group to tailor the theme and content of each show to perfectly suit their audience.

Educational programs, school residencies, benefit shows, guest lecturing and outreach work are a core component of the group’s mission. Windborne has taught workshops in schools, arts centers, singing camps, and universities for the past decade. Experienced teachers and song leaders, they delight groups young and old, large, and small, with enthusiastic, clear, and nuanced instruction and get groups singing in harmony in no time! All songs can be taught by ear with no experience required - just enthusiasm and willingness to try new things!